Okay, even though the fire is 92,000,000 miles away, it was a HOT day in Dubrovnik. Our hotel restaurant has outdoor seating overlooking the small bay and harbor at Cavtat. It is a blessing to be able to eat outdoors: anywhere indoors just feels oppressive. 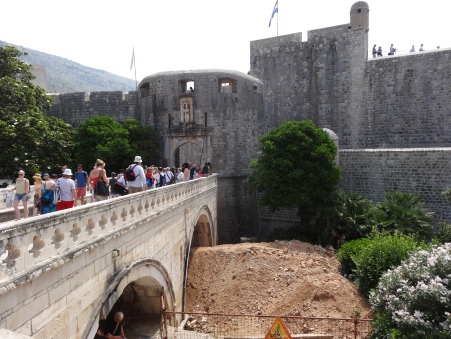 We loaded the buses up and took the 30 minute drive to the Pile Gate of the old walled city. The tour gave us a bit of perspective on the older history of Dubrovnik, as well as the more recent disputes. While much has been repaired, pock marks from shrapnel still speckle the facades of some of the older buildings.

After the guided tour, a smaller group of friends did a little shopping, then sought out the breeziest, shadiest spot for a cold beverage and octopus and Greek salads. While it was out of the hubbub of the lower streets, it was nice to be away from the crowds.

Riding the gondola up to Mt. Srd

Looking north from the gondola

We made the rounds to several churches and the synagogue, and then hiked outside the walls to the gondolas that take you to the top of Mount Srd. (No, I did not leave out the vowels – that’s really how it is spelled.) We did a little shopping in the gift shop, and then moved to the outdoor cafe for the breeze and a cold drink. (Notice a pattern here?) 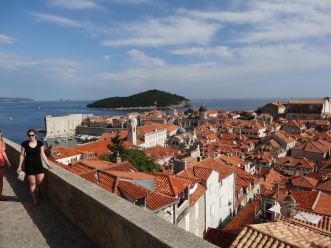 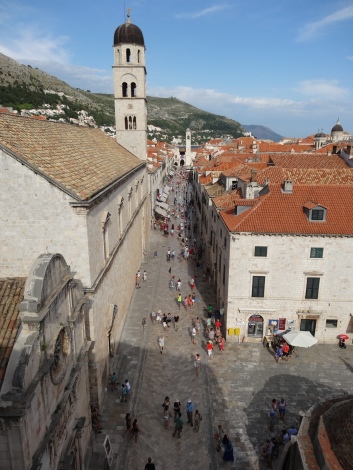 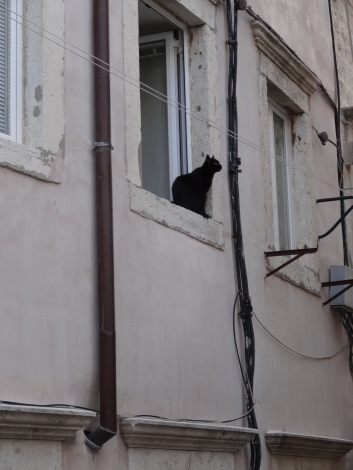 By the time we returned to the old city, the sun was lower, and some cloud cover had moved in. We climbed to the top of the wall: you can walk the entire wall – about 2 kilometers. Beautiful views of the tile rooftops and spires, all set against the blue blue blue Adriatic Sea. 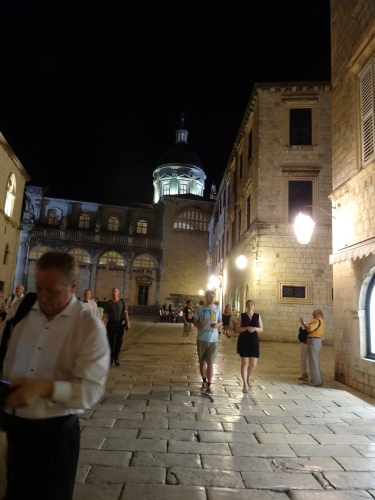 Dome of cathedral where we sang

Then, it was on to more shade, breeze and food before our concert. We stuffed ourselves into our concert clothes, and headed off to the cathedral. It was a bit of a small space to squeeze ourselves up in the front, but we had a “full house.” Besides our own “groupies,” we had actually recruited some of our audience on the flights to Dubrovnik, while a few others wandered in when they heard us rehearsing. Particularly surprising was to find two people from Watsonville: a reporter from the local paper, and Nita Gizdich, U-pick farmer, pie-maker extraordinaire, and Watsonville luminary. So nice to see an unexpected face in the crowd!

A scoop of gelato on the way back to the bus after the concert helped to cool off, and a celebratory cocktail at the hotel capped the night. I’m really liking aperol spritzers…

Posting and photos are delayed because the wifi is not working. Hope to have a better connection tomorrow. 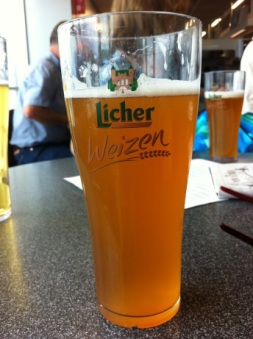 The five-hour layover in Frankfurt called for brats and beer – so glad we found a nice heffeweisen. After a weather delay, we departed Frankfurt for Dubrovnik. Ah, nearly to a spot where we can be horizontal for a few hours. 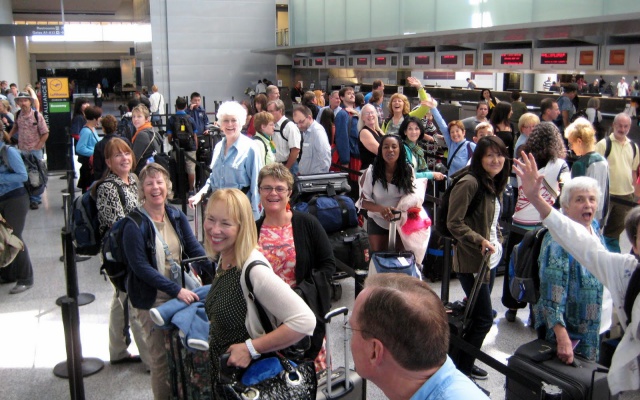 It must have looked like the circus had come to town. Nearly 90 of us lined up at the Lufthansa ticket counter, ranging in age from pre-teen to retirement age, all dressed for travel, with a variety of colored suitcases, carry-on totes, backpacks, hats and even a wind wand. (Still can’t believe that the wind wand made it through security…)

Long haul flights are never fun, but at least we had on-demand movies and TV to try alleviate some of the figgeties that come with confinement. We were delighted to find that we were also sharing the flight with Peninsula Youth Symphony, heading to Germany for a one-week tour.

We’re still 19 days away from departure, but I feel like I should do more than find my passport. I’ve pulled out my rolling suitcase, which has gathered dust since we went to Botswana in 2005. (I found a great convertible travel pack, and have used that for trips, domestic and international, ever since 2006.)

Now, I am in Stage 2: Making Piles. Many of the items on my list are still in use, or will be used again before we leave: shoes, toiletries, concert garb. But, things like noise-canceling headphones, sunscreen, cash belts can be readied to avoid any last-minute rush. Sorting through my closet for warm weather clothing, I’m selecting only items that can easily be hand washed and dripped dry and still be relatively wrinkle free.

Then there is the weeding of the piles: can I wear or use this more than once, or for more than one purpose? Do I really need SPF 15 and 30 sunscreen? Will I ever really get chilly? An umbrella AND a rain jacket? How big does my carry-on need to be? Then, I remind myself I am traveling to western Europe – packing oversights are easily remedied with a quick shopping trip.

As I sort through it all, the plan is have the suitcase closed by two days before departure. Looks like I have a good start on this process, but I probably won’t be adding more until after the send-off concert on the 15th. At least I now have a good working list. 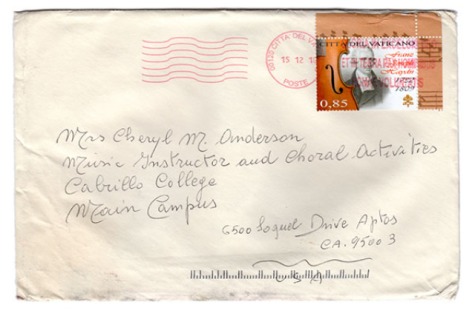 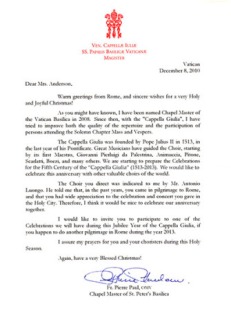 We are social creatures by nature: receiving an invitation is always flattering. it says that the sender thought that your presence was important for the occasion. It goes straight to the ego: “Oh, you want ME!”

An invitation can come in many forms: choosing up sides for a pick-up basketball game, a text message or phone call to meet for lunch. They can be spontaneous or they can be planned well in advance. For bigger life celebrations, like birthdays and weddings, the invites are more colorful or artful, and often delivered by the mail carrier. Whatever the occasion, invitations are usually framed to entice you to accept.

Certainly when the Vatican sends an invitation, they do it in style. So, when you receive an ornately hand-addressed enveloped, postmarked Citta del Vaticano, with a stamp commemorating Franz Joseph Haydn, this does capture the attention. Then, as the enclosed letter evokes the Vatican history back to Pope Julius II and Palestrina and 1513, well, it becomes even more compelling. But, the clincher? The charming sentence, “Therefore, I think it would be nice to celebrate our anniversaries together.”

And so, this journey began, with a humble and eloquent note from the “Chapel Master” at St. Peter’s Basilica in Rome.