Carolyn and I were raised through the dissident 1960s and 70s. We are proudly ‘inquisitive’ to the point of being ‘difficult.’

We had contradictory advice from a variety of sources about this road. But one key piece of advice: Talk to the locals and use them as the most up to date source of local information. Talk to people! We did and it was always fun! We should have talked and hung out with the locals even more.

All the local information said the Petauke Road was do-able. It was surely the most interesting stretch of road we traveled in Zambia.

Villages were rural and apparently saw many more aid workers than tourists. Some villages had soccer fields where we left new soccer balls and drove away (we saw local kids playing with soccer sized wads of plastic wrapped with strips of inner tube).

Our advice: ask several locals about the road, arrive at the Petauke road-head early in the morning, dry season only, don’t go barreling across any concrete bridges, have GPS and a satellite phone, and be OK with spending the night if night falls or you break down. Be comfortable with being stranded in the bush of Africa. Or, take the Chipata Road where there will be traffic.

Our previous day’s drive was short because, we were told, there was really no other good place to stop between Lusaka and the South Luangwa park gate. We had queried Safari Drive about a potential route across Lower Zambezi National Park to get to Bridge Camp. I think we heard the gasp across seven time zones when Clare read that e-mail query – it really wasn’t a viable option. Her return email read, “Do not even consider taking this route.”

But, there are two ways to get to the Mfuwe area, our next destination. One route, recommended to us, was to drive east to Chipata, and then loop back northwest to Mfuwe. While the road is paved to Chipata, the road from Chipata to Mfuwe is notoriously bad and slow going. In fact, our itinerary stated, “Allow 6 hours for the drive as the last part is dirt and quite dangerous. Slow and careful driving is essential as it is easy to slide off the road.”

The other option was to divert north at Petauke, dropping down the escarpment and essentially following the Luangwa River to Mfuwe. We were admonished, both in writing and on the telephone, that the Petauke Road was not an option: “You must drive via Chipata to South Luangwa. The road from Petauke north is 7 hours of very bad road and you should not think about driving that route.”

Both are long, difficult roads. Other sources tell us that the Chipata/Mfuwe route is boring, but the Petauke road is more scenic. When we checked in with Chris back in Livingstone, he thought that we were quite capable of taking the Petauke Road. We reserved our final judgment for this morning, but we left at sparrow’s fart (Australian slang for dawn) to give ourselves the most daylight possible. After all, we didn’t want to break two rules in one day, taking the Petauke Road AND driving in the dark. Besides, we are much more afraid of driving in the dark than driving a difficult route! 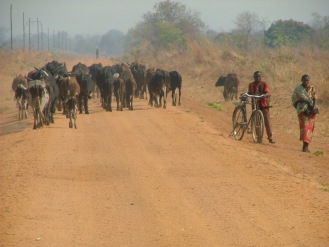 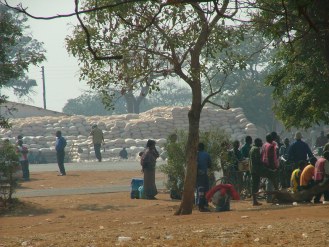 No naked lights at the petrol station!

We stopped at Petauke to fuel up, and asked our attendant about taking the Petauke Road to Mfuwe. Her response? “It’s a shortcut.” Well, okay, there you have it – the locals call it a shortcut. It was just before 9:00 a.m. – if it really was 7 hours of bad road, we have plenty of daylight to get there.

So, we turned north at Petauke. Nine hours later, we arrived at Wildlife Camp.