Driving from Dubrovnik to Split

Farmland between Dubrovnik and Split

On the way to Split

Today is Statehood Day in Croatia. We spent part of our bus ride rehearsing the Croatian national anthem. Proved to be a cool thing.

Our lunch stop (complete with thousands of cruise ship passengers) was the old city center of Split. With Diocletian’s retirement palace serving as the Roman architecture base, Renaissance, Baroque and most recent architecture styles are all repurposed, connected and reimagined through the centuries. 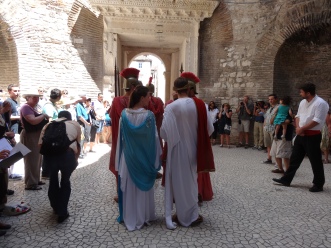 Singing with the traditional clapa singers

The entrance peristyle is a wonderful rotund space, even though the ceiling is open to the sky above. We arrived there, music folders in hand, to listen to the six men singing traditional Dalmatian songs. We responded in kind, singing one of the spirituals, My God is a Rock. The men sang another song, and then we all sang the Croatian national anthem together. It was surprisingly moving for me, sharing music with people we just met, and sharing not only a love of music as well as a love for Croatia. Although we have only been here a few days, after hearing the tales of recent war, it is good to be here in a time of peace, on the eve of Croatia’s entry into the European Union. The memory of sharing that music with these gentlemen still brings tears to my eyes. 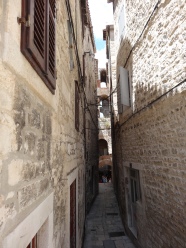