We’re here! Our gravel road has turned into a single vehicle track, and the dry weather allows us to drive the more scenic road along the river and the eastern edge of the park. We’re anxious to start spotting wildlife – it’s one of the biggest reasons we are here.

As we cruise north, we do spot some birds and animals. But, as we leave the last human settlements, we find that the most abundant wildlife are tsetse flies. They are persistent, voracious, and hard to kill. I got a few bites, but they found Steve irresistible. We quickly retreated behind rolled up windows and air conditioning, spending the next few kilometers smashing the flies trapped in the car. Simply smacking them only stuns them, so that they drop to the floor to regain their senses enough to bite feet and ankles. Smashing, crushing and stomping are required. They are relatively slow-moving as far as flies go, and we discovered that our field guides and journals worked best as fly swatters.

We arrived at Nanzhila Plains Safari Camp about mid afternoon. We were greeted by our hostess, Ruth, who urged us to abandon our fly-riddled vehicle for the boma, overlooking a dambo, and miraculously fly-free. It’s hot outside of the air conditioning and the cold drink Ruth offers goes down easily.

In quick succession, we see the arrival of Ruth’s husband, Brad, and then Vivienne and Tom Heineken, our would-be hosts at our next camp, Kaingu. Tom and Viv are traveling to Johannesburg, and stopped at Nanzhila Plains on their way out of Kafue. They asked if we could deliver a key and 20 liters of petrol when we travel to Kaingu in three days. We agreed, becoming part of the bush delivery network.

Soon after, two British couples arrived, having traveled south to spend the night in Nanzhila’s chalets. They were also self-driving, but it was clear that at least half of their group were having serious problems with tsetse fly bites. We were told that if we stay out of the trees we should be able to stay out of the flies. That seemed to be true as we watched a pair of waddled cranes dance their courting dance and the kingfishers hunt at the edge of the dambo.

The big news of the camp was that a pair of lions had been through the previous night, walking right through the camp. Just what I worried about most: trying to cook and eat dinner at dusk, only to have lions stroll into the area – oh boy! 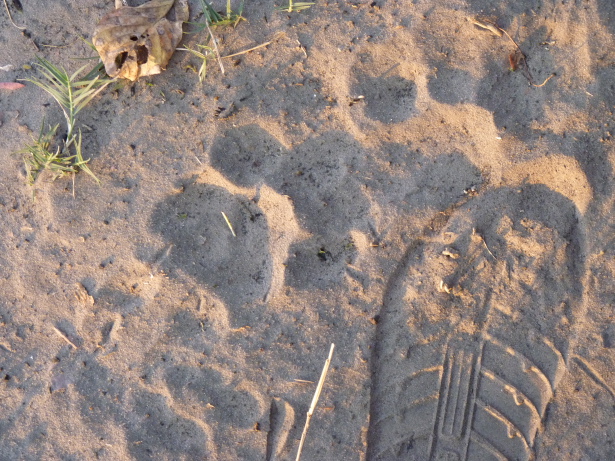 We headed over to our campsite as the sun was beginning to sink into the horizon. Steve wanted to go out driving again. But, I took one look at the lion tracks all over our campsite and decided I’d rather get all the cooking and bucket showering done before dark.

The camp staff built a fire and put on a bucket of water to warm for our showers. I rummaged through all the camping gear, trying to find things I needed, looking back over my shoulder every 10-15 seconds. We had a simple dinner: potatoes wrapped in foil and tucked in the coals, green beans and onions in a small cast iron casserole, and two steaks. Steve showered while I put things together, and I showered while Steve grilled the steaks.

It was dark when we finished, and Steve napped in his camp chair while I cleaned up and washed dishes. By now, I had somewhat relaxed, possibly aided by my pre-dinner gin and tonic. There were other campers in the two adjoining sites, so I hoped that all the activity would keep the lions away – if they were even still in the area.

I hoped for lions after we were safely tucked into our rooftop tent. Steve woke me sometime later that night from a dead sleep to the neighborly howling of a hyena. I was awake the rest of the night, listening for critters prowling under our tent.

This site uses Akismet to reduce spam. Learn how your comment data is processed.